Journey Into Well Being 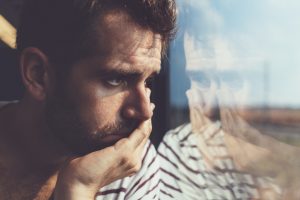 Depression (major depressive disorder or clinical depression) is a common but serious mood disorder. Depression symptoms are recognizable and can affect how you feel, think, and handle daily activities, such as sleeping, eating, or working.

One out of 10 adults in the United States will battle depression this year. Depressive illnesses are the leading cause of disability and account for one death by suicide every 13 minutes so it’s important to recognize depression symptoms and seek help, whether it’s for you or a loved one.

Some forms of depression are slightly different, or they may develop under unique circumstances, such as:

If you or someone you know have been experiencing some of the following signs and depression symptoms for most of the day, nearly every day, for at least two weeks, you may be suffering from depression:

Depression symptoms and the illness they represent afflicts both men and women, though men are less likely to seek treatment. Only a third of people with depression respond to treatment with a single medication. Research suggests that therapy is equally effective to medications, and may be more effective than medication at decreasing the risk of recurrence. Depression ruins lives and relationships and you should not try to manage it alone.

Depression symptoms are something that should not be ignored. Treatment for depression can be successful, but first the illness must be properly diagnosed by a mental health professional in a clinic such as Labyrinth Psychological Services.